We have arrived in Buenos Aires! I love this city already. We have yet to venture out for dinner, and I’m getting an early jump on today’s updates. We walked a bunch today and it was a feast for the senses.

After breakfast we headed into the Microcentro district to look for money changing. Imagine yourself in a huge outdoor mall that is one street wide and about 10 blocks long. Everything from shoes, clothes, perfume, snacks, ice cream is sold here. Modern stores such as Adidas, Nike, and others are all here. Now add a few tens of thousands of people. And about 8 people per block are inconspicuously standing around saying, “Cambio, cambio.” (Change, change). Some are quiet, a few are animated. None are aggressive. It’s the way you exchange $USD for Argentine Pesos.

We spotted a man who looked nice enough. You can’t exchange on the street and so after we negotiated 13 pesos per USD, we followed him to their place of business, down a (not) dark alley and into a shop that fronts as a tour/event place. There behind a door were customers like us and the man with the money. They even had a security guard. We were given our stack of bills and a table to count and inspect for counterfeit. Everything was legit, and we were quickly on our way. And for the record, the official rate today is 8.25 pesos per $USD.

We walked the Microcentro area and within is Plaza de Mayo. This plaza was founded in 1580 (yes that old) and was named to commentate the May Revolution that began Argentina’s independence from Spain in 1810. It is used for many protests, and it sits right out front the Casa Rosada, more on that below.

Around Plaza de Mayo are many famous buildings including the Argentine National Bank, Casa Rosada, and Catedral Metropolitana. Casa Rosada is Argentina’s equivalent of the White House, and is used for presidential meetings. It was built in 1873.

Catedral Metropolitana is a huge cathedral and also the final resting place of General San Martin. Cathedrals are amazing places as they are, and this one was fantastic plus the added bonus of such an important historical figure.

The city is beautiful. The streets in the two barrios (neighborhoods) we have been so far were relatively clean, not much litter to speak of, and starkly different from one another. Microcentro is bustling with people! Puerto Madero is adjoining to the east, yet quiet and peaceful. You can walk from shopping insanity to quiet waterfront in just a few blocks.

Weather today was partly cloudy and mid-80s and humid. Clouds came in later in the afternoon and brought a breeze. We cooled off and had ice cream at a popular chain called Freddo. Despite the temps, we were not uncomfortable.

Tomorrow we walk to barrio San Telmo for Feria de San Telmo, their Sunday market. From what we have heard, they close their main Street and vendors with art, crafts, leather goods, jewelry, antiques, and memorabilia come to sell their goods. Oh and the parrillas (grills) are there a plenty.

I assume we will find another place serving steak tonight. Not sure I will get tired of that. David sure isn’t!

I had a hard time narrowing down the pictures. Here are a few! 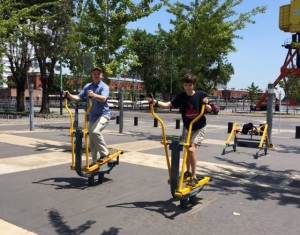 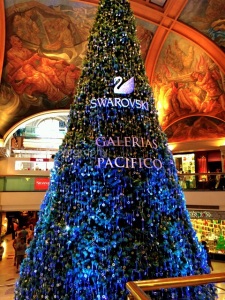 The Christmas tree in the Galleria mall, decorated entirely with Swarovski crystal ornaments

The entombed body of General San Martin inside Catedral Metropolitana 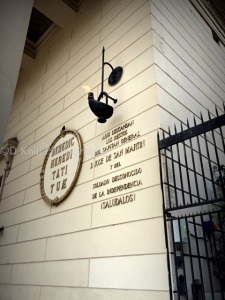 JFK isn’t the only one with an eternal flame. General San Martin has one too.

No bathing in the fountain, or you’ll be in for a shock! 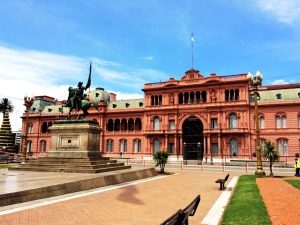 Casa Rosada, Argentina’s version of the White House. No background security check required to go in.